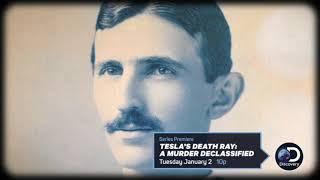 Was the legendary inventor Nikola Tesla murdered for inventing the first weapon of mass destruction? The Discovery series "Tesla’s Death Ray: A Murder Declassified" investigates the theory and follows attempts to rebuild his theoretical weapon. Famous for his work on alternating current, Tesla was one of the most famous minds of his day. But he died mysteriously and was found dead in his hotel room in 1943, at the age of 83, with his safe reportedly cracked open and some of h

An Interview with Nikola Tesla from 1899

[This is a true interview that scientist Nikola Tesla gave the magazine "Immortality" in his laboratory in Colorado Springs.] "Everything is the Light. In one of its rays is the fate of nations, each nation has its own ray in that great light source, which we see as the Sun. And remember: no one man that existed did not die." "Perhaps in the most people, the brain is keeper of knowledge about the world and the knowledge gained through the life. My brain is engaged in more imp

The World of Free Energy

An inside look at the world of infinite, free energy and how we are responsible for its release.